by Tatiana Gren-Jardin, Head of the Modern Slavery Policy Unit

Ben is a 14 year old who found school difficult. He often skipped classes and got in with the wrong crowd. During that time he was targeted and groomed by criminals. They manipulated him into delivering crack cocaine and heroin to local users. He was promised money but told that, if he ‘snitched’, his Dad would be stabbed and they would sexually assault his mum and sisters. He also got into ‘debt’ with the gang when drugs and money were taken from him as part of the exploiters’ plan. They said that if the police caught him he should give a ‘no comment’ interview and refuse to give names or details. The police found Ben in a ‘Trap House’ and, when interviewed, he found the courage to explain what had happened.

Ben is just one of more than 3,000 children criminally exploited in the UK, identified and referred for support to the National Referral Mechanism last year (the Government system to support victims of modern slavery). Two thirds of these children were British nationals recruited and exploited locally. Of the total number of cases, 1,371 cases of criminal exploitation were flagged as ‘county lines’ where children were recruited and exploited by the gangs to transport drugs across the country. But we need to be clear: this is a form of modern slavery.

Last week we read in the news that Labour MPs are preparing to table an amendment to the Police, Crime, Sentencing and Courts Bill that “would make it a criminal offence to take advantage of an imbalance of power to coerce, control, manipulate or deceive a child into committing a criminal offence” with a sentence of up to 14 years.

Indeed, criminal exploitation of children is a rapidly growing and pervasive crime sweeping across the entire country – destroying the lives of the most vulnerable. No doubt it must be treated seriously and the perpetrators must get the toughest punishment they deserve for exploiting children.

According to the Crown Prosecution Service (CPS), county lines is a national issue involving exploitation of vulnerable children and adults by gangs in order to move and sell drugs across the country. The victims are often aged 14 to 17 years and are groomed with money, gifts or through relationships and forced to carry out day to day dealing. Some children are even forced to carry drugs inside their bodies, which is known as ‘plugging’, that goes beyond criminal exploitation and should be treated as sexual offence, as recommended in the CSJ’s report ‘Unsafe Children’ earlier this year.

So what can we do to tackle this crime and truly curb this predatory behaviour?

First, some mythbusting. The Modern Slavery Act 2015 (MSA) introduced life sentences and should be used to ensure justice is done. Section 2 of the Act defines the offence of human trafficking where, in order to commit an offence, facilitation of travel is required. However, this travel can be from point A to point B in the same country, even in the same house. It does not require moving people across borders – this is a myth we need to bust. Furthermore, under section 1 which defines slavery, servitude and forced labour, no travel is required and the consent of a person does not preclude a determination that the person is a victim or not. We have to understand this and use it to bring these exploiters to justice.

Second, go after the perpetrators. Last year a key inspectorate report ‘Both sides of the coin’ found that the MSA can be used effectively to deter county lines offenders and brought a number of examples where criminals controlling county lines operations being convicted of modern slavery offences as well as drug supply offences. It recommended pursuing modern slavery offences in county lines cases, where possible, as well as impose other forms of restrictive orders available under Section 14 of the MSA. The Independent Anti-Slavery Commissioner, Dame Sara Thornton, welcomed the report and called police and prosecutors to recognise county lines offenders who force their victims to carry drugs – often under the threat of extreme violence and intimidation – as perpetrators of modern slavery. The CPS’ own guidance on prosecuting human trafficking, smuggling and slavery encourages prosecutors to consider all available charges when considering a prosecution in connection with county lines offences, including the Modern Slavery Act.

Thirdly, support abused children more effectively. They need care and support to begin their recovery from the vicious cycle of abuse and exploitation. They are also our strength in pursuing the perpetrators. For example, Justice and Care’s Navigator Programme is already bearing fruit: 87% of all victims supported by the navigators are supporting police investigations. This compares to around 30% nationally. And one of the recent additions to the team is the child Victim Navigator who engages with the police to help them see the victim behind the offender – like Ben – as well as support them to break the cycle of abuse and engage with police.

Last but not least, political leadership is essential. We hear time and time again through our research that frontline professionals are grappling with a number of complex issues trying to do their best to protect the victims and bring perpetrators to justice. However, leadership from the top, guidance and resources are still scarce in comparison to the scale and nature of the modern slavery crime, including the criminal exploitation of adults and children. Police and prosecutors often lack confidence and go for the lower hanging fruit, charging for the crimes that require a lower evidential burden than the offences under the MSA. As a result, too many criminals are running riot in our communities, preying on the most vulnerable.

The Centre for Social Justice@csjthinktank
An independent think-tank, established to put social justice at the heart of British politics. 👉 MEDIA: media-enquiries@centreforsocialjustice.org.uk
Total Tweets12.29K
Followers23.37K
Following2.63K
The Centre for Social Justice @csjthinktank
23 hours ago
Yesterday we hosted @sajidjavid in Blackpool. In his speech, the Health Secretary spoke about the hidden costs of covid and set out his plans for the new Office of Health Improvements and Disparities (OHID). You can watch the full speech here: https://t.co/BXZCdKpxEF
2 5

The Centre for Social Justice@csjthinktank
An independent think-tank, established to put social justice at the heart of British politics. 👉 MEDIA: media-enquiries@centreforsocialjustice.org.uk
Total Tweets12.29K
Followers23.37K
Following2.63K
The Centre for Social Justice @csjthinktank
1 day ago
We were thrilled today to connect Health Secretary @sajidjavid with organisations from the CSJ Alliance of life-changing charities to discuss mental health in Blackpool. https://t.co/LaGGINfOxt 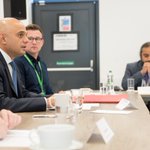 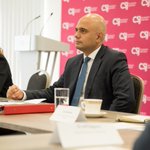 The Centre for Social Justice@csjthinktank
An independent think-tank, established to put social justice at the heart of British politics. 👉 MEDIA: media-enquiries@centreforsocialjustice.org.uk
Total Tweets12.29K
Followers23.37K
Following2.63K
The Centre for Social Justice @csjthinktank
1 day ago
Q from our online audience asks about the role of family and how Government is supporting families as the “first line of defence”.@sajidjavid confirms the new Office for Health Improvement and Disparities will look at the role of the whole family in improving health.
4
Follow @CSJthinktank