Yesterday, the Centre for Social Justice was pleased to host the Secretary of State for Justice, Rt. Hon Robert Buckland QC MP, for a major policy speech in which he outlined his plans to ‘rebuild criminal justice in our country’ after the Covid-19 pandemic. He addressed three key areas of policy: victims, probation and prisons.

The Lord Chancellor spoke of the trauma experienced by victims of crime – trauma which is often compounded by the process of reporting the crime and seeing it through to conviction.

‘So difficult has it become that too many people in our country feel that it is frankly more hassle than it is worth. And in order to avoid compounding their trauma, they would rather sacrifice the justice to which they are entitled.’

The Lord Chancellor committed to passing a ‘Victims Law’ to place the Victim’s Code on a statutory footing (as proposed in our recent ‘Unsafe Children’ report), as well as an end-to-end Rape Review and accompanying Action Plan to change the culture around rape and sexual assault.

We welcome this commitment to victims.

However, trauma felt by victims of crime is often compounded by delays in the system. Justice delayed is justice denied and witnesses, victims and defendants currently suffer delays which serve to cause huge anxiety and can even jeopardise the fairness of proceedings. Currently, the Crown Court backlog sits at 60,000 cases. We call on the government to take firm and urgent action to tackle the Court backlog and ensure citizens receive a fair and timely hearing, both in normal times and times of crisis.

Reflecting on the recent unification of the Probation Service, the Lord Chancellor said:

‘We are putting down a strong foundation for change, with twelve probation areas across England and Wales led by Regional Probation Directors who are now responsible for the delivery of services…’

We welcome the Government’s recent unification of the probation service, its investment of an extra £155m this year, and its commitment to recruit record numbers of probation officers. We also welcome the strengthening of community-based sentences using GPS and sobriety tagging. Indeed, we believe that new available tech in the market means we can go further than ever before in our use of community-based orders, as outlined in our paper ‘Sentencing in the Dock’. We call on the government to be bold in seeking new alternatives to immediate custody for non-dangerous offenders to serve their sentences in the community with the support of family, the consistency of employment and housing, and access to treatment.

The CSJ has long spoken of the value of voluntary sector organisations who work tirelessly up and down the country, transforming their communities. It is vital that small, local and specialist organisations remain central to the government’s reforms, including in the delivery of the newly unified probation service, and that adequate funding follows.

Finally, the Lord Chancellor turned to the prison estate:

‘…Prisons are so much more than just mandatory boarding houses for criminals. In the course of a prisoner’s sentence, the prison service does vital rehabilitative work that can help us to address the amount of crime that now comes from reoffending, as well as its staggering estimated cost of over £18 billion per year.’

The Lord Chancellor announced he will publish a Prisons White Paper that would address: prison capacity, digital technology in prisons, security response in prisons and the potential for a new drug strategy, resettlement passports for those leaving custody, the use of trauma-based methods in the women’s estate, and investment in the prison workforce. We welcome the Government’s commitment to reviewing each of these areas in the upcoming Prisons White Paper.

We have long championed investment in our prison workforce and a more effective strategy to tackling drugs in prisons, as outlined in our 2019 report ‘Control Order & Hope’.

We also consider it vital for the maintenance of family ties, access to education, and treatment for addiction and mental health needs, for the necessary infrastructure to be put in place so that digital technology can be meaningfully rolled out across the prison estate. This was outlined in our recent report ‘Digital Technology in Prisons’.

The measures outlined by the Lord Chancellor are much needed.

However, we believe that the criminal justice system is currently in a deep state of crisis and that the experience of victims and witnesses, defendants and offenders falls far short of the mark. While we encourage the government onwards in its current direction, we believe there’s an urgency to the problems we face which requires more speed and confidence.

By Emily Farley, Senior Researcher at the CSJ

The Centre for Social Justice@csjthinktank
An independent think-tank, established to put social justice at the heart of British politics. 👉 MEDIA: media-enquiries@centreforsocialjustice.org.uk
Total Tweets12.43K
Followers25.04K
Following2.70K
The Centre for Social Justice @csjthinktank
21 minutes ago
👩‍🏫To tackle severe absence, the DfE needs a dedicated programme of school attendance mentors who can support these children as they reengage in education. With absence rates at record highs, this support has never been more needed.Read our report👇 https://t.co/BRjoFDOPPW

The Centre for Social Justice@csjthinktank
An independent think-tank, established to put social justice at the heart of British politics. 👉 MEDIA: media-enquiries@centreforsocialjustice.org.uk
Total Tweets12.43K
Followers25.04K
Following2.70K
The Centre for Social Justice @csjthinktank
21 minutes ago
📚 While tutoring will help children who are in school, we desperately need support for children who aren't.⚠️ The government needs to tackle the epidemic of school absences and lost time in the classroom if it wants to help all pupils to catch up.
1

The Centre for Social Justice@csjthinktank
An independent think-tank, established to put social justice at the heart of British politics. 👉 MEDIA: media-enquiries@centreforsocialjustice.org.uk
Total Tweets12.43K
Followers25.04K
Following2.70K
The Centre for Social Justice @csjthinktank
21 minutes ago
🌡️ Some of these absence figures will be accounted for by illnesses. Around 14% of pupils were persistently absent because of illness alone. 🚨 But these figures should be cause for alarm. As we said last year, kids can't catch up if they're not in school.

The Centre for Social Justice@csjthinktank
An independent think-tank, established to put social justice at the heart of British politics. 👉 MEDIA: media-enquiries@centreforsocialjustice.org.uk
Total Tweets12.43K
Followers25.04K
Following2.70K
The Centre for Social Justice @csjthinktank
21 minutes ago
📈 Persistent absence is also up, at an alarming rate. In Autumn 2021, a quarter of children were persistently absent.⚠️ That's the highest rate on record. https://t.co/A0ybxSNMRL 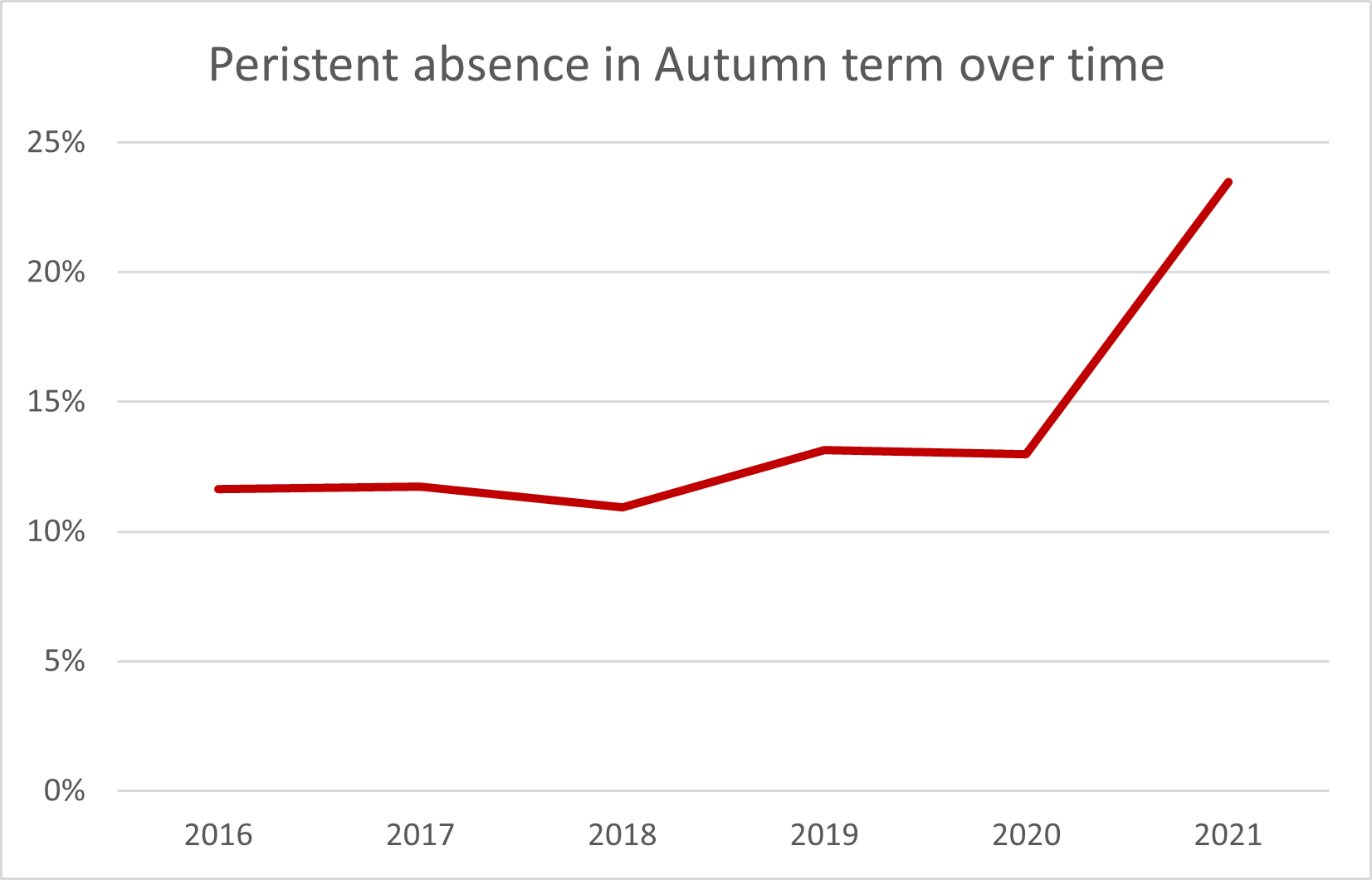